The Age of Homebodies

To expand on an offhand comment in the previous post, to give a nod to everyone staying at home tonight on New Year's Eve, and to set up a convenient directory of fossil groups:

The Upper Ordovician of the Twin Cities metro includes, in ascending order, the St. Peter Sandstone, the Glenwood Formation, the Platteville Formation, the Decorah Shale, and a tiny remnant of the Cummingsville Formation (and yes, they each deserve an explanatory post). There are a few other formations above the Cummingsville Formation in southeastern Minnesota, but that, as they say, is for another time. In terms of fossils, we're mostly looking at the Platteville and Decorah. Calling the St. Peter Sandstone "sparsely fossiliferous" is an understatement, the Cummingsville Formation of the metro is more or less limited to a few lucky blocks near where St. Paul, West St. Paul, Mendota Heights, and Lilydale meet, and although the Glenwood Formation has a decent microfossil assemblage (if you need a hand lens or microscope to see what it is, it's a microfossil), it's been stingy with most other fossils. What we do have from these three formations is not radically different from the Platteville and Decorah, at least not in terms of phyla and classes and so forth.

The Decorah Shale is the king of Twin Cities rock formations in terms of fossils. You don't have to take my word for it; try these reviews:
Fossils are commonly found either loose, having eroded out of the shale, or concentrated in thin limestone beds. One of the fun things about the limestone fossil hashes is how you can keep finding new things in them; there's just so many fossils in some pieces that you can't notice everything at once. The average small sample of Decorah fossil hash, say a rock chunk about as thick as a finger and about palm-size across, will probably have specimens of brachiopods, bryozoans, and crinoids (the typical Decorah "BBC") and often also includes snails and fragments of trilobite exoskeletons. Breaking out a magnifying glass or hand lens sometimes reveals other things. A surprisingly common type of "accessory" fossil are millimeter-scale conical objects, which were once the home of the enigmatic extinct cornulitids.

Read more »
Posted by Justin Tweet at 8:59 PM No comments:

For the first post on something specific, I'm going a bit outside of "equatorial" and heading, instead, for approximately the end of the Pleistocene. The geologic time scale is worth a post on it own, but for now, if you're not familiar with the geologic time scale, a brief version is available through the University of California Museum of Paleontology, or you can get all the nitty-gritty from the International Committee on Stratigraphy; the ICS version is slightly more recent, so some of the dates are slightly different because they're a bit more refined. For our purposes, the Pleistocene was a time when glaciers advanced and retreated through Minnesota.

In 1923, the Northwestern National Life Insurance Company was building a new home office across from Loring Park. This building still exists, by the way (see this for its qualifications as a historic site), although the insurance company has long since moved to larger digs. During excavation, workmen cut through old moss beds and other deposits with fossils, eventually described by William S. Cooper and Helen Foot in 1932. It isn't stated, but because both authors were affiliated with the University of Minnesota, I can only guess that this is where the fossils ended up (with the exception of the snails and clams, which went to the Museum of Natural History of the University of Illinois). The following information comes from their publication, except where otherwise indicated.

One more bit of exposition...

The loving attention of generations of continental glaciers has covered most of the metro area with copious glacial drift. There are plenty of stories here for future posts, but for now I'll just make the observation that because of this, if you want to find bedrock outcrops in the Twin Cities, you need to find places where the glacial deposits have been cleared out. The best places for this are along the Mississippi River.

Many of you are familiar with Mississippi National River and Recreation Area, also known as MNRRA ("Minn-Ra") or MISS. MNRRA cuts a narrow strip from Riverside Park in Anoka County to Hastings, 72 miles (116 km) long. The National Park Service does not own most of the land within the boundaries; instead, MNRRA is a partnership park, in which the Park Service works in concert with a number of different landowners. State, county, city, business, educational, and any number of private entities are found within the river corridor. At this time, the acreage owned by the NPS includes some islands and the Coldwater Spring parcel between Minnehaha Park and Fort Snelling State Park. The river bluffs within MNRRA are the best places in the Twin Cities to observe the rocks and fossils of the metro. Of course, right now is not the best time to visit, but you can still stop by the Visitor Center in the lobby of the Science Museum of Minnesota. Many of the sites in the map (below) are of interest for geology and paleontology, and will be covered at some point. The site I have in mind for the next entry, though, is a bit outside... 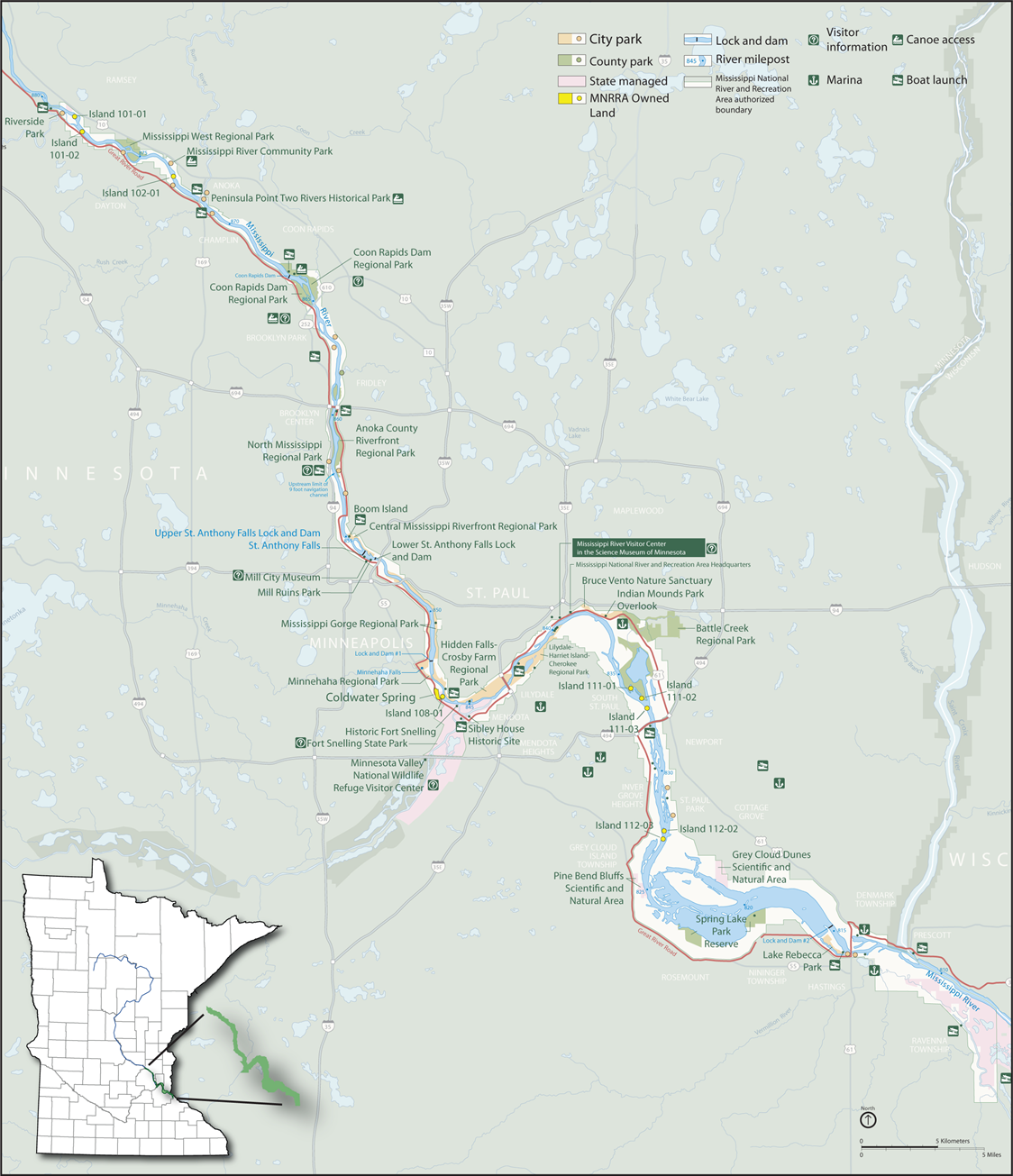 Before we get too far into things, we ought to establish some background. If words like sandstone and limestone aren't part of your daily vocabulary, it wouldn't be very fair of me to go on about them without letting you in on why they are important, would it?

First of all, rocks fall into three broad groups: igneous, metamorphic, and sedimentary. The first two are not of pressing concern at this time and so will only be mentioned briefly, although at some point we will return to them. Igneous rocks form by cooling from a molten state, i.e. magma or lava. They include rocks like granite, one of the patron rocks of countertops, and basalt, a common dark stone which is often what you get from flowing lava. Metamorphic rocks are produced by subjecting rocks to heat and/or pressure. The minerals of a rock are altered by these factors, and sometimes banded textures appear. Metamorphic rocks include marble, the other patron rock of countertops, and schist (foliated; sheet-like thin layers) and gneiss (banded), beloved for their pun value (many geologists are addicted to terrible puns). Of course, if you ramp up the forces of metamorphism too much, the rock melts, and you're back around to igneous processes.

Read more »
Posted by Justin Tweet at 9:47 PM No comments:

Today is December 15, 2013. It has reached perhaps a robust 7 °F outside (or -14 °C), and several inches of snow cover the ground here in the Twin Cities. In short, Minnesota is not a place you associate with the Equator, tropical warmth, balmy seashores, and the like. It wasn't always like this, though. Jump in your favorite time machine and go back 20,000 years ago. Hopefully, it's smart enough to compensate for the fact that glacial ice covers the land and doesn't try to materialize within it. If you can get the door open, you'll see that the weather can always be worse. Now, kick the slush off of your boots (you did come prepared, didn't you?) and spin the dial to 1.1 billion years ago. It should be somewhat warmer: provided you sprung for the expensive automated chrono-telometry package and so are not drifting in deep space, you should now be viewing an impressive rift valley, complete with volcanoes.

But I promised the tropics, didn't I? Head home now, collect your swim gear, get your time machine somewhere along the bluffs in St. Paul or Minneapolis, and plug in 454 million years ago. Southeastern Minnesota is near the margin of a shallow continental sea a few degrees south of the Equator. It's a sunny day with the trade winds blowing across the water. There are no sharks to worry about, but there are a number of squid-like animals with long straight shells (I probably should have mentioned that earlier). The seafloor teems with branching things, small clam-like shells, plant-like sea lilies, snails, and crawling things that look kind of like pillbugs.

Or perhaps you'd like the beach, or at least something with fewer squid-like things and crawly things? Take the time machine a few million years before our last stop and navigate to the coast. You'll find the purest beach sand you can imagine. There aren't any palm trees for shade, but at least the sun is not quite as powerful as it will become, and it is unlikely that any of the invertebrates had invented CFCs and such, so the UV rays should be more manageable. Also, you'll have that beach all to yourself.

Or maybe you say "The heck with that! I can go to a beach any time I want. I've got a time machine – I want to see dinosaurs!" Why not start at sometime between 100 and 95 million years ago? Depending on your exact geography, you'll end up on a coastal plain or above (hopefully) another shallow sea. There are dinosaurs wandering the land, although we don't know much about them yet, and creatures like coiled ammonites and sharks in the sea, with marine-adapted relatives of crocodiles along the coast.

Of course, nobody's actually got a working time machine, and anyone who did would probably be busy fighting the temptation to commit historical crimes, committing historical crimes, or doing things that would erase the universe, so it's probably a good thing. However, it is possible to observe the records of these times and places, probably a lot closer than you'd expect. Passing Dayton's Bluff? There's that beach, beneath the rocks from the shallow equatorial sea. Stopping by St. Anthony Falls? You're looking at a remnant of a waterfall system that formed at the end of the last ice age. Taking in the fall foliage in the St. Croix River Valley? Part of the "basement" is the old rift. These are what Equatorial Minnesota is about. I plan to share information about the geology and paleontology of the state, from rock formations to types of fossils to notable localities to the human history. Because my professional background is strongly linked to the National Park Service, I'll also sometimes discuss the geology and paleontology of Park Service units. Of course, my personal interest starts with Mesozoic animals, particularly dinosaurs, so they'll also get the occasional spotlight. Finally, I reserve the right to occasionally toss in something else. I hope you find this blog to be enjoyable and informative!