Following from the previous installment, this second and final batch of museum photos comes from the "Paleontology Laboratory". This time around, I'm pretty sure I took almost all of them, both film and digital photos. It was probably my first extended use of a digital camera, and most of the photos I've selected are from the digital set. The facility had a small hall displaying ten or so specimens, none as large as the Tarbosaurus at the Natural History Museum, but again coelurosaur-heavy.

We've entered the "M"s, where we'll be for the next few entries. This entry features quasi-titanosaur Malarguesaurus florenciae and distinguished miniaturized sauropod Magyarosaurus dacus plus whatever else is in (or out of) Magyarosaurus. Before getting into the discussion, you may be interested to know of two recent freely available titanosaur publications, González Riga et al. (2019) and Mannion et al. (2019). González Riga et al. (2019) is an overview of the limb and girdle bones of South American titanosaurs, and names a clade Colossosauria for Lognkosauria plus Rinconsauria. Mannion et al. (2019) redescribes Dongyangosaurus sinensis and Jiangshanosaurus lixianensis, and finds them and a couple other taxa (Baotianmansaurus henanensis and Yongjinglong datangi) to be outside of Titanosauria (which required a few notes to be added to previous entries).

Some of you may have come across online photos or information concerning a dinosaur skeleton from Japan informally named "Mukawaryu" ("Mukawa dragon", "-ryu" for "dragon" being the traditional suffix for informally named Japanese dinosaurs). The specimen went from "informally named" to getting a real scientific name in just a couple of years, exchanging "Mukawaryu" for Kamuysaurus japonicus.

Geology at the Minnesota State Fair

When I've been available, for the past few years I've worked a shift at the Geological Society of Minnesota's booth at the Minnesota State Fair. (There are state fairs and state fairs; I was there last year when they set a daily attendance record of 270,426, and yesterday was probably well over 200,000 as well.) The GSM has had a booth in the Education Building for many years, with a display of rocks and educational materials.


Of course, the primary function of the GSM booth is to inform the public about the society itself, but we also spend a lot of time talking to visitors about the rocks and minerals of the state. Sometimes people have even asked us to identify objects in photos or hand sample. Given this is Minnesota, one of the favorite topics of conversation is agates. The state gemstone is the colorfully banded Lake Superior agate, although they certainly aren't limited to the North Shore; thanks to glaciers that moved south out of the Superior region, agates have been scattered across much of the state. The GSM booth has a few on-hand, but the DNR Building has a much larger assortment on display, including the nearly 50-pound (23-kg) "Agzilla". 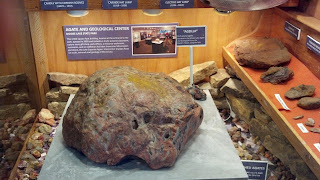 "Agzilla" usually calls the Agate and Geological Center at Moose Lake State Park home. Incidentally, Moose Lake holds Agate Days annually in mid-July. Another notable geologic state park is Hill Annex Mine State Park, near Calumet, which is not only of note as an example of a Mesabi Range open-pit mine, but is also one of the best-known Cretaceous sites in Minnesota. The visiting season at the park has just ended, but the Minnesota Discovery Center in Chisholm also exhibits Cretaceous fossils from the Iron Range. A few of the fossils from Hill Annex joined the agates at the DNR building.


If you're looking for upcoming geological events, October is a very good month in Minnesota. The GSM's lecture series opens in mid-September and continues into December. The Minnesota Mineral Club holds its annual show at the Armory in Cottage Grove over the third weekend in October, and over the same weekend, Whitewater State Park will be holding a "Geology Gathering", which I will be participating in on Saturday the 19th. Also, the Science Museum of Minnesota will hold an Object ID day on Saturday the 5th, and we're tentatively planning a fossil walk at Coldwater for Saturday the 12th.