Where are they now: 1980s dinosaur rumors, sauropodomorphs

And now we return to 1982. We have seen the future of theropods, now let us turn to the future of sauropodomorphs. One future was that of Supersaurus and Ultrasaurus, a future of every large sauropod having to out-superlative the sauropod before it. This future petered out before it got any farther, kneecapped by an honest mistake half a world away and a terminal case of bonebed chimerism. Another future was that of Roccosaurus, the fanged prosauropod, and it was a terrible bleak cheesy early-'80s dystopian future, with leather and chains and synthesizers. That future never came to pass. Others involved overlooked fossils from Portugal and central Asia taking their rightful places, or promises of skulls from India, or an unusual elongate cervical vertebra from Wyoming, or a skeleton from Tendaguru.

Where are they now: 1980s dinosaur rumors, theropods

One of the great mantras of paleontology is "wait for the paper" (occasionally with choice adjectives between "the" and "paper"). Paleontology is, after all, a science of delayed gratification. First you have to find the fossils, then prepare them, then write and submit a manuscript, and then see it published. This process is measured in years in the best of times, and often some information gets out, either intentionally (talks, posters, news releases) or unintentionally (unredacted information in other publications, gossip, etc.). We went over part of this ground before. Here's a group of concrete examples.

All of the other echinoderms

If you thought that echinoderms have a variety of seemingly unrelated body plans today (sea stars, crinoids, sea urchins, sea cucumbers...), you should have seen them during the Paleozoic, when several now-extinct classes populated the oceans. The group with probably the most recognition are the blastoids, or sea buds, which had stalks like crinoids but with a nut-like structure instead of a cup-like structure as the business end. The rocks of the Twin Cities area are not known to have produced blastoids, but they have produced rare examples of four other groups not including the crinoids we saw before. They are: asteroids (sea stars), rhombiferan cystoids, edrioasteroids, and stylophorans (a.k.a. carpoids, a.k.a. homalozoans). Three of these groups are extinct, and it doesn't take much to guess which. This diversity of echinoderms is not particularly unusual; Cincinnatian rocks have all the same classes as well as brittle stars and cyclocystoids (extinct and known mostly from their ring-like outer structures), and the Bromide Formation of Oklahoma, of comparable age, outdoes the Minnesota rocks handily. But for the luck of the cosmic draw, any of these extinct groups might be around today. 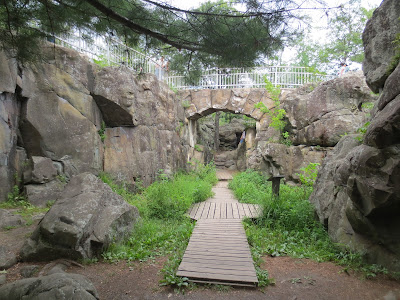 This is part of Devil's Parlor in the Minnesota side of Interstate Park, on the St. Croix River. I was at the park on Saturday for a park geology program, and following work I wandered through the Glacial Gardens section. Interstate Park, as its name suggests, has units in two states, in this case Minnesota and Wisconsin. The two parts are state parks, associated with but not part of St. Croix National Scenic Riverway (the Wisconsin side is also the western trailhead for the Ice Age National Scenic Trail, as well as one of the nine parts of the Ice Age National Scientific Reserve). Interstate Park is known for its glacial landforms, imprinted primarily on Precambrian bedrock.

Read more »
Posted by Justin Tweet at 1:34 PM No comments: