An interesting fact concerning nautiloids and the Platteville Formation is that the biggest nautiloid shells are often found only partially preserved, because their diameters (up to around 10 in/25 cm) exceeded the depth of the Platteville ooze they sunk into (Webers 1972a, 1972b). This means that when you see a fossil of one of these big Platteville nautiloids where the cross-section is partly round and partly irregular, you can guess that the round part represents what was buried; the rest of it was eroded off. So, while a small nautiloid can be completely buried: 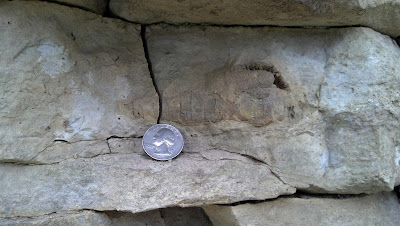 ...the big guys aren't so lucky. Take these examples from Sogn, Minnesota:


Half a nautiloid is better than none, and for these two nautiloids, it permits a bonus: other shells and organic fragments collected in the eroded nautiloids. Notice the off-white patch near the center of the first cross-section above? Here's a close-up: 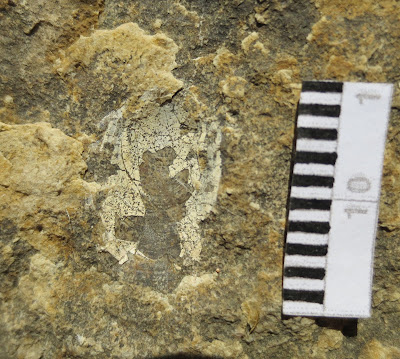 This is a small lingulid brachiopod (modern cousin Lingula; see a larger relative from Oklahoma rocks of reasonably similar age to the Platteville here). There are several fossils larger than millimeter-sized chips visible on these nautiloids, and they all appear to be the same kind of lingulids. This is an interesting association, but I couldn't tell you what it means. Here are two of the better-preserved examples: 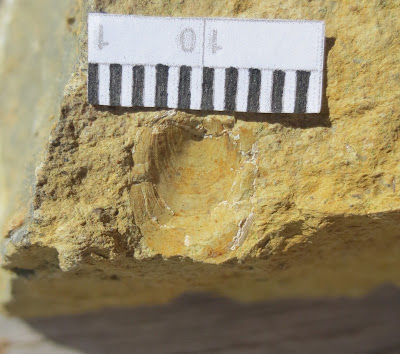 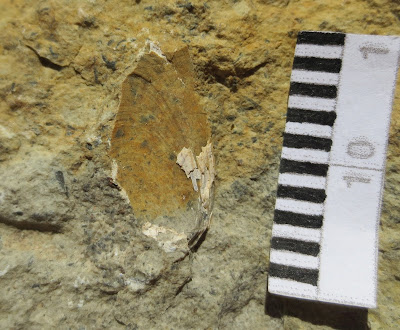 The National Fossil Day monthly feature for September is Port Kennedy Bone Cave (archival link here; added 2018-03-14), in Valley Forge National Historical Park. There is a Pleistocene theme this year, and caves are great for Pleistocene fossils. Port Kennedy Cave is the second cave-based feature I've written this year, after Rampart Cave, and the third cave feature total (we've also got Gypsum Cave). We've still got three months to go, and I could certainly see some more caves in there. Anyway, I'm writing this to direct you to a story on an unusual site (you get middle Pleistocene mammals, Edward Drinker Cope, Valley Forge, a rumored buried train, and bone preservation compared to "over-ripe pears"), and provide some supplementary material on the species described from the fissure.

Read more »
Posted by Justin Tweet at 5:02 PM No comments:

By now you may have heard about the new paper by Ji Q. et al. on Liaoningosaurus, proposing some surprising things about the paleobiology of this ankylosaur. Andrea Cau already had a go at it over at Theropoda. I'm afraid I won't be as concise or insightful, but possible gut contents are involved, and having fought my own gut-content dinosaur to a truce, I think I can bring a distinct perspective to this paper.