This week saw the end of an era in Minnesota paleontology with the passing of Bruce Erickson. Bruce had been the curator of paleontology at the Science Museum of Minnesota from 1959 to 2017, where he was most famous for his work on the Paleocene fossils of Wannagan Creek. Much of his research was on crocodilians (several examples of which were featured in this post), but he also worked on many other topics, including the dinosaurs of the Poison Creek Quarry (Morrison Formation), champsosaurs, and turtles. Examples of many of these fossils can be seen in the paleontology exhibit area of the Science Museum, which includes a Wannagan Creek section (one of the few large Paleocene exhibits you'll find in a museum), several Morrison dinosaurs, and an enormous Triceratops (a composite of two partial skeletons he collected early in his tenure). If you'd like to know more, many of his publications and other paleontological publications from Science Museum collaborators can be downloaded here. 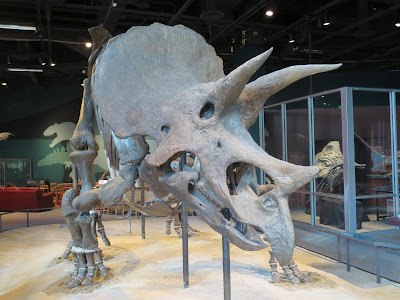 Email ThisBlogThis!Share to TwitterShare to FacebookShare to Pinterest
Labels: Science Museum of Minnesota

I saw the headline "Surprising Dinosaur Discovery: Ankylosaur Was Sluggish And Deaf" and was indeed surprised, not so much by the "sluggish" part but by the "deaf" part. Hearing is generally pretty lightweight in terms of anatomical investment and it's useful wherever there is a medium to communicate sound. Even snakes can perceive sounds via vibrations. We're not talking about something like flight, a costly adaptation that requires a body specifically dedicated for it. It's not difficult to understand why, in the absence of natural pressure to maintain it, many lineages of birds have become flightless on islands. Hearing, though... I was having trouble coming up with a selective scenario that would eliminate it. So I thought I'd have a look at the actual paper (Schade et al. 2022).

...And it turned out the headline overstated things. Schade et al. (2022) described the holotype braincase of the diminutive Late Cretaceous European nodosaur Struthiosaurus austriacus. As part of their study, they measured the areas of the braincase associated with hearing. They calculated the mean hearing frequency as 1230 Hz and the bandwidth as between 296 and 2164 Hz. For the musicians among us, that works out to keys 42 (D above middle C) to 76 (double high C), centered just below key 67. Judging by a helpful chart on Wikipedia, this range is comparable to that of a chicken. [Update, 2022/01/17: Lead author Marco Schade has sent me an article, Hill et al. 2014, that shows chickens have a wider hearing range: 9.1 Hz to 7.2 kHz at 60 dB. This honestly makes more sense than the Wiki range, which seemed pretty constricted for a bird. The next closest match on the chart is the bullfrog, provided of course that the range is accurate; Heffner and Heffner 2007 give a slightly more constricted range than the Wiki chart, of 100 Hz to 2.5 kHz.] Schade et al. also commented that "the auditory acuity of S. austriacus seems somewhat superior to that of turtles". Thus, the paper did not find S. austriacus to be deaf, although it appears that they did not enjoy an especially rich range of sounds. [2022/01/20: To be completely fair to the headline writers, there seems to have been some difficulty with the German word "schwerhörig", which as Schade informed me means something like "barely able to hear".] (We must of course remember that this is one braincase, and it's possible that we happened to have stumbled on one individual with poor auditory capabilities, violating our unspoken assumption that fossilized organisms tend to the average rather than the extremes. More braincases would help to tell.)

There is also an intriguing counterpoint featuring the somewhat larger and earlier North American nodosaur Silvisaurus condrayi. In the original description (Eaton 1960), Eaton noted the presence of inflated nasal sinuses, which he interpreted as resonating chambers. With a diameter of approximately 50 mm (2 in), the chambers were postulated to have produced a sound "about E or F four octaves above middle C". This is surprisingly high-pitched, at keys 101 or 102 on an extended piano, or 5274.041 or 5587.652 Hz. (In fact, it's so high-pitched something doesn't seem right. Either Eaton or I have misinterpreted something in the sound physics, those aren't resonating chambers, or Silvisaurus went through life projecting the majestic sound of tinnitus.) Either would be well beyond the postulated hearing range of S. austriacus.

This all still leaves room to play with that original headline. How could we get a lineage of deaf nodosaurs? It has been suggested that snakes have reduced auditory capabilities because they evolved from burrowing ancestors. This doesn't seem especially feasible for nodosaurs; if nothing else they would have lost their spikes and plates long before their hearing had they been doing serious full-body burrowing. There's another possibility, though: S. austriacus is thought to have been an island endemic. If the founding population included an individual with reduced auditory capabilities, and that individual contributed disproportionately to the gene pool, we have a route for this trait becoming prevalent in at least this population of nodosaurs. A similar phenomenon could happen later in the island population's history as well, although it would be more difficult for any one mutation to spread with a larger population. Unfortunately, it would be very difficult to test this hypothesis without a whole lot of braincases from multiple stratigraphic horizons.

Eaton, T. H., Jr. 1960. A new armored dinosaur from the Cretaceous of Kansas. The University of Kansas Paleontological Contributions: Vertebrata 8:1–24.