I come from Cottage Grove, Minnesota, and in the southeast part of town there's Cottage Grove Ravine Regional Park. Up until a few weeks ago, I had no idea that there was actually exposed bedrock in the park. The only outcrops I knew of in town were a couple of pockets around the compost site, a couple of spots in Old Cottage Grove, and some outcrops of the St. Peter Sandstone up high on Camel's Hump overlooking Highway 61 (there's a little park up on the crest of the hill now, with a good view across the valley, by the way). Obviously, I had to have a look around.

Read more »
Posted by Justin Tweet at 5:12 PM No comments:

Meanwhile, over at the Science Museum

Recently, the Science Museum of Minnesota reconfigured the exhibit space for the paleontology in conjunction with changes to other parts of the floorplan. I don't recall if the previous configuration had been stable all the way back to the 2005 Society of Vertebrate Paleontology meeting (I do know a nice Goniopholis was added around 2010), but where once it had looked like this:


Two major components, the Morrison dinosaurs and the Wannagan Creek fossils, are still where they had been. The major differences are in the section on the east, with the removal of some visible lab space and some more portable specimens, most notably a sort of "circus ring" of small- to medium-sized Cenozoic animals, mostly mammals.


In their place are a group of mounts from the Oligocene of coastal South Carolina (transferred from the floor above) and the well-known Science Museum Triceratops, relocated from another part of the floor. A Triceratops going mobile is just not a common occurrence these days, so naturally the event received some local coverage. A few other pieces were also rearranged, including the Xiphactinus lurking behind the Stegosaurus in the first picture above, some of the remaining mammals, the Goniopholis, and your friend and mine Thescelosaurus. Green River Formation fossils also get more prominence.

On the one hand, the Triceratops no longer has its niche with the backdrop: 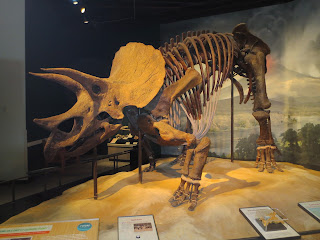 On the other hand, you can now walk around the whole mount, if for example you should want to look at the legs and hips:


I may cover some of these exhibits in a bit more detail in the coming weeks, given the approaching busy holidays. Till then, though, Allosaurus bids you all adieu: 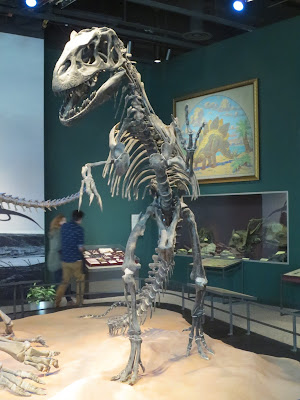 Some thoughts on St. Anthony Falls

If you're familiar with the history of Minneapolis, you probably know that beneath what we now call St. Anthony Falls are the remains of the natural St. Anthony Falls. The real falls went kaput quite a while ago; October 5, 1869, to be precise. The creation of the Hennepin Island tunnel is usually named as the culprit, but after seeing this photo I am beginning to suspect suicide. For various reasons, the presence of a waterfall or a reasonable facsimile thereof was required, so with the aid of the Army Corps of Engineers, the body was embalmed in wood and cement, and propped up in its accustomed place.

Out of the blue, my supervisor recently asked me if I knew anything about a piece of art depicting a shall-we-say stylized and retro dinosaur labeled "Claosaurus" at the Berlin Aquarium. This was one of those odd coincidences that we are taught to avoid in fiction: I'd been thinking about writing a post on Claosaurus, and now I was being commanded by the gods of serendipity. I've had a soft spot for this modestly publicized duckbill since before I was ten, when I read about it in a magazine and it became my first "hipster" dinosaur. (My second was Epanterias, because this was the late '80s/early '90s, when iconoclasts like Bob Bakker and Greg Paul had just raised the siren song for the splitting of Allosaurus fragilis and the community was not yet hardened by cynicism about mysterious giant theropods not known from enough material to draw a dirty look in the express checkout.)

Read more »
Posted by Justin Tweet at 1:53 PM No comments: