The many moods of Rauffella

Earlier in February, I attended a Geological Society of Minnesota fossil lab hosted by Jeff Thole and Macalester College. At some point someone brought out a fossil that they weren't familiar with; it looked a lot like the final photo in this post, a light-colored object that resembled loops of cord. What this person had was one of the most characteristic but least scientifically appreciated fossils of the Decorah Shale: the trace fossil Rauffella (specifically R. palmipes, as we'll get to later).

Read more »
Posted by Justin Tweet at 8:58 AM No comments:

I've come up against some judgement calls at this point. There are two varieties for this exercise. The first includes a group of names based on poor material that have had little study but which are sometimes/often stuck into Titanosauria, usually from historical inertia or the "provenance argument". The provenance argument goes something like this: "the only described sauropods from this time and place are titanosaurs, ergo this is a titanosaur". The provenance argument is a seductive bit of taxonomic stereotyping, but I'm wary of it. For one thing, the implicit flip side is "therefore there cannot be anything else here than titanosaurs". When the provenance argument is correct, it's not because you put in any effort or had any kind of insight, and when it isn't, you look stupid for being lazy. When confronted with this dilemma and, say, a handful of teeth which have no particular characteristics that would put them in one group or another, I don't see what's wrong with "indeterminate sauropod". The other type of judgement call includes the frustrating taxa that sometimes end up in a clade and sometimes end up outside of it, generally because they are in that fuzzy transitional zone.

For this particular entry, I had cause to consider examples of both types: in the historical orphan bin are "Campylodon" ameghinoi (=Campylodoniscus) and Clasmodosaurus spatula, and in the fuzzy clade bin is Chubutisaurus insignis. I decided that the position of Chubutisaurus is too unstable to be confident it's a titanosaur at this point, and so left it out. We can always cover it later on, with some of its similarly ambivalent cronies. As of this writing, others in a similar equivocal position which I currently have outside of Titanosauria include Angolatitan adamastor, the two Huanghetitan species, Ligabuesaurus leanzai, Mongolosaurus haplodon, Phuwiangosaurus sirindhornae, Tastavinsaurus sanzi, Triunfosaurus leonardii, and Wintonotitan wattsi. Two things they almost all have in common: late Early Cretaceous age, and when they do show up in Titanosauria they're just barely over the line. The other two were more problematic because there's not much material and they've never attracted much interest. I decided to cover them here together as examples.

Like their cousins the rebbachisaurids, the dicraeosaurids have been on a roll over the past year. I featured the new oldest dicraeosaurid, Lingwulong shenqi, last year. This week saw the publication of another new dicraeosaurid, from a much more typical time and place (the Early Cretaceous of South America), but with a unique style all its own: Bajadasaurus pronuspinax.

Concerning an Isotelus and its acquaintances

Here we have a big ol' rock. 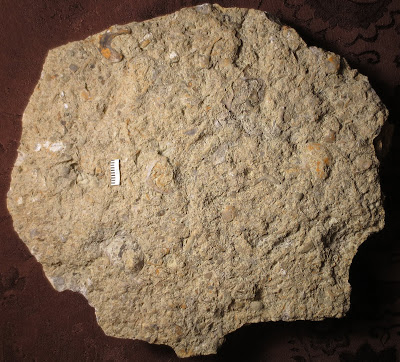 Read more »
Posted by Justin Tweet at 9:07 AM No comments: