Anatomical terms of location are one of the categories of jargon that are a fact of life in paleontology. For our current purposes (generally dinosaurs), there are three major whole-body groups of terms and a few other smaller groups. They are most relevant to vertebrates and other animals that have bilateral symmetry. I am going to capitalize the terms so they stand out, but this is not how they are written (unless of course they start a sentence). (I reworked most of these definitions from the introduction of The Dinosauria [Weishampel, Dodson, and Osmolska, eds., 1992 edition.])

Several of the basic terms vary depending on the identity of the animal in question. This is because one set of terms originated with human anatomy, and another set originated with the anatomy of animals that do not walk with an erect spine. There is some mixing and repurposing of terminology. A straight-up application of human terms to other animals gives the following correspondences:
However, for animals other than humans, Anterior and Posterior are often used in place of Superior (Cranial) and Inferior (Posterior). This muddles with the original definitions, but has the advantage of not including the potentially confusing Cranial and Caudal. We'll let this helpful Sauropelta illustrate: 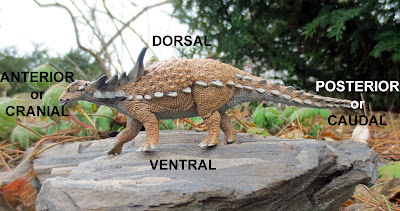 These terms are used relatively as well, i.e. x-feature is more dorsally positioned on a vertebra than y-feature. When we discuss a skull, Cranial is redundant (you're already there), and Rostral, referring to the tip (rostrum) of the head, is its replacement. For tails, Caudal has the same problem, and Cranial sounds kind of strange, but Anterior and Posterior still work. Proximal and Distal (see below) are also appropriate for some aspects.

Another set of directions is used when we consider the midline of an animal. Suppose we observe an animal along the center of the back, along the animal's length. Features close to the midline of the body are designated Medial (toward the midline), in opposition to features farther from the body's midline, which are designated Lateral (away from the midline). Again, we summon the helpful Sauropelta (doubly helpful by also illustrating Proximal and Distal).

The third main set of terms is used with the limbs and tail. The term Proximal refers to features or bones toward the mass of the body, while the term Distal refers to features away from the body. Thus, the hand of our friend is considered Distal compared to the upper arm, and in the hand itself the palm bones (metacarpals) are considered Proximal compared to the finger bones (unguals). This works the same way with features: a limb bone with an expansion on the end farthest from the body can be said to have a Distal expansion.