Stromatolites in the snow

To close out 2021, here are some stromatolites in the snow.

At this location there's a large wall of Prairie du Chien Group rocks that was exposed a few years ago during the construction of a bike trail. The bike trail descends from north to south, exposing more of the section as you go until a few dozen feet of the Lower Ordovician are visible. There is a distinct stratigraphic break near the top of the section, and just above this break is a stromatolitic interval with some large colonies, like the eye-shaped example above. I haven't seen any definite fossils below the break, but there might be some (there are numerous small voids, at least some of which could represent dissolved shells). There are some nice sedimentary structures, though, such as cross-bedding and planar bedding (sand grains in the carbonate). 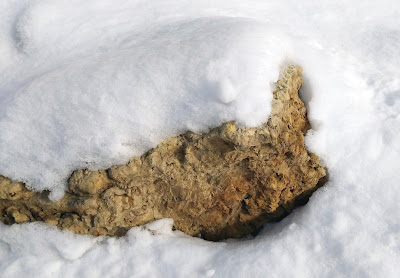 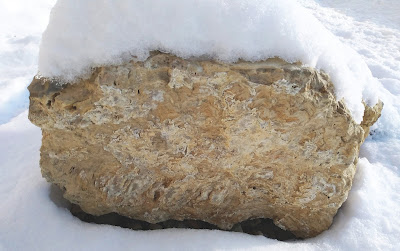 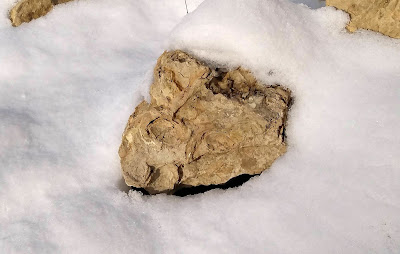 Theory and Application of Hypsibema

The dance of splitting and lumping will go on as long as there are two people and something to classify. On the one hand are the creators of new names. Are they revealing the hidden biological diversity of the past and present, or are they necessary evils at best, scurrilous egotistical rogues who turn taxonomy into tacky monuments to their own questionable genius at worst? On the other hand are the lumpers. Are they providing clarity against confusing multiplicity, or are they cranky reactionary gatekeepers who secretly (or not-so-secretly) flatter themselves as lonely upright crusaders against disorder and incompetence? Well, fellas, you can make questionable decisions splitting or lumping!

Consider, for a moment, the case of Hypsibema:

Late in 1869, Edward Drinker Cope presented a group of bones from North Carolina to the Academy of Natural Sciences of Philadelphia. He proposed to name the assortment Hypsibema crassicauda. The description takes up a grand total of 112 words (no illustrations, of course) and is reprinted below in its entirety:

"He [Cope] exhibited a number of remains of fossil reptiles, from Sampson Co., North Carolina, of cretaceous age, which were intrusive in miocene beds. Among these were humerus, tibia, fibula, metatarsus, caudal vertebra, and perhaps cervical vertebrae and ungueal phalange of a Dinosaur, discovered together by Prof. W. C. Kerr, Director of the Geological Survey of North Carolina. The remains indicated a species having the same general form and size as the Hadrosaurus foulkei. The caudal vertebra was of very different form, and resembled more that of Hylaeosaurus, minus the diapophyses. This vertebra was elongate, depressed and angulate. The animal presented various other points distinguishing it from Hadrosaurus, and was named Hypsibema crassicauda."

Note that Cope had received them second-hand, with no other information about their association other than they were "together". He was young at this time, not yet 30 and just getting started in this dinosaur business, but this was just one example of a worrying tendency that would show up again in his career: despite all of his undoubted paleontological acumen, he never seemed to twig to the idea that perhaps collections of bones found in the same general area did not necessarily belong to the same species or even genus. (See also Monoclonius.)

Because H. crassicauda was thought to have hadrosaurian affinities, Lull and Wright (1942) naturally included it in "Hadrosaurian Dinosaurs of North America". By that point Cope's bounty had been reduced to a caudal vertebra, the distal end of a humerus, a tibial shaft, and a partial metatarsal II, catalogued as USNM 7189 (National Museum of Natural History, Washington, D.C.). Lull and Wright passed the following judgment: "The material is too meager and uncharacteristic to permit a real definition of the genus and species, and the form must therefore be considered a nomen nudum [as mentioned here, basically a nomen dubium as understood today]. It indicates, however, the presence in North Carolina of Cretaceous hadrosaurs of uncertain affinities." Well, hallelujah, and so forth; insert your own uproar as the mood strikes. (One slightly disconcerting note: Lull and Wright thought the caudal resembled the caudal of fellow North Carolina form Hadrosaurus tripos. Hadrosaurus tripos is now regarded as a Pliocene whale.)

In hindsight it is very easy to say that Cope shouldn't have bothered naming Hypsibema crassicauda. The material isn't great and there is no real evidence that any of the bones belong to the same thing. It can be counter-argued that he didn't know any better and was acting within the bounds of mid-19th century vertebrate paleontology, but it still is not his finest hour. (None of the surviving bones can even articulate, for crying out loud. Even if they'd been found in an area the size of a square foot they could still easily be a hydraulic concentration of random fauna, and here he is thinking they're the same thing after getting them second-hand at best?)

So much for the 19th century.

Elsewhere and elsewhen, in 1942 geologists of the Missouri Geological Survey were studying clay units in southeastern Missouri. One of them, Dan Stewart, came into contact with Lulu Chronister, who told him about bones found on the Chronister farm during the digging of a well. One thing led to another, and in early 1945 Stewart and Charles Gilmore (of Thescelosaurus and Alamosaurus fame around here) published a description of 13 caudal centra (neural arches apparently lost around the time of discovery) and two fragments, catalogued as USNM 16735. They used the bones as the basis of new sauropod Neosaurus missouriensis (Gilmore in Gilmore and Stewart 1945). If you've never heard of Neosaurus missouriensis, it's because Neosaurus turned out to be preoccupied, and Gilmore quickly substituted Parrosaurus (Gilmore 1945). Gilmore (in Gilmore and Stewart 1945:25) commented that "[t]he specimen on which the present paper is based consists only of caudal centra that in the ordinary course of events would be considered too meager for generic designation, but in view of the uniqueness of both its geographical and geological occurrence the name Neosaurus missouriensis is proposed for its reception."

Neither Hypsibema crassicauda nor Parrosaurus missouriensis garnered much attention over the next few decades. Then, in 1979 Donald Baird and Jack Horner published a review of Cretaceous North Carolina dinosaurs. Things did not go well for Hypsibema crassicauda at first; Baird and Horner determined that the type material was chimeric. They restricted the type to just the caudal vertebra, because Cope had based the species name ("thick-tailed") on it, and identified it as belonging to a sauropod. They then pulled the tibial and metatarsal fragments as hadrosaurian, and identified the "humerus" as the distal end of a tyrannosaurid femur. So far, this is just another case of the clinical dissection of an obscure questionable name.

Then, though, the authors brought out Parrosaurus missouriensis. Technically speaking, with a publication title of "Cretaceous dinosaurs of North Carolina" they could have ignored P. missouriensis and nobody would have felt shortchanged, but they opted to go the extra mile. In fact, they went farther than the extra mile, sinking Gilmore's species into Cope's species: "Now that Hypsibema has been freed of hadrosaurian encumbrances its genetic identity with Parrosaurus becomes obvious. Every morphological feature cited for the Missouri vertebrae can be matched in those from North Carolina. Indeed, the possibility of specific identity cannot be dismissed..."

The bit about sauropod (mis)identification is a topic for another time and place. For the moment, the critical piece is sinking one poorly known species into a different poorly known genus on the basis of exactly one piece of overlapping material: the caudal of H. crassicauda, with remnants of the neural arch (which you don't even get with P. missouriensis). Even if they are very similar, that's asking a lot out of dinosaurian caudal centra, which are not generally noted for having unusually high concentrations of apomorphies. Implicitly this classification is saying that the rest of the body of the two forms will not differ significantly, a bold statement all around. Whether or not you agree with the synonymization, I suspect you'd probably agree that it's not an ideal situation.

Because for many years there was little interest in the disposition of H. crassicauda and P. missouriensis (although missouriensis became the state dinosaur of Missouri during that time frame), the generic synonymization has persisted. Recent developments in Missouri bode fair to spur a reassessment, though.

[Note: despite the url for this entry, I did not write it in August 2018, I only started working on a post with a couple of the ideas and gave it a custom url because I didn't like the automatic version. (For that matter, the present entry owes much more to another and even older post idea.) Of course, I had long forgotten about the custom link when I dusted it off. Seeing as there's no critical reason to change it, I'll let it stay.]

Cope, E. D. 1869. [Remarks on Hypsibema crassicauda and Hadrosaurus tripos.] Proceedings of the Academy of Natural Sciences of Philadelphia 21:192.

It's the early afternoon on one of those gray days that Minnesota churns out from about the time the leaf show is over to about the time that snowfall gets serious; it's as if Mother Nature, not quite sure what weather to go with, simply throws the gray blanket over the state until she makes up her mind. I am wandering the Mississippi River gorge in St. Paul and Minneapolis.

Email ThisBlogThis!Share to TwitterShare to FacebookShare to Pinterest
Labels: diversion, everything and nothing
Newer Posts Older Posts Home
Subscribe to: Posts (Atom)