It seems reasonably fitting for the Memorial Day weekend for the next stop to be at Fort Snelling State Park. Although the fort is certainly best known for its place in the history of Minnesota, it is also an early geological locality of note. Because of this, and because much of the original bedrock has been covered, this post will have a more historical bent.

Read more »
Posted by Justin Tweet at 7:43 PM No comments:

I just got back from the Conference on Fossil Resources (#10, hosted by the South Dakota School of Mines & Technology at Rapid City; I'd like to compliment the organizers on the fine meeting!), so I haven't really had the opportunity to do anything in-depth for the blog. As a consolation prize of sorts, you can follow this link to read the article I presented on Thursday. The citation is at the end (the title is the best part). 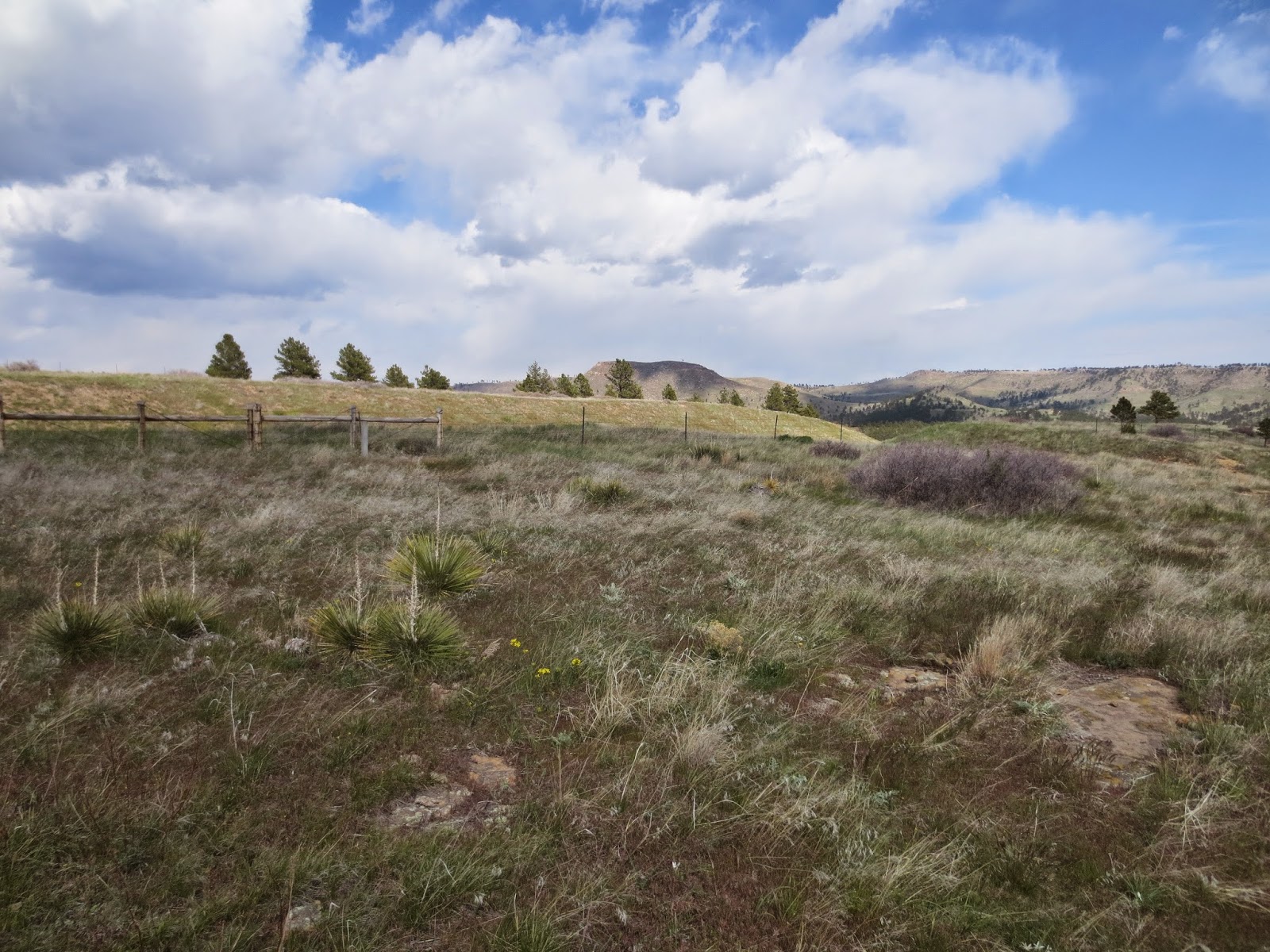 A major part of the conference concerned a site represented in the above photograph, a pleasant and picturesque slice of the southern Black Hills once known as Fossil Cycad National Monument. You may notice a distinct lack of fossil cycads (actually, cycadeoids, which are not quite the same thing) or National Monuments in this photo. This is because practically all of the surficial fossils were removed, in large part thanks to the researcher who wanted the site to be a national monument in the first place. My supervisor and sometimes coauthor Vince Santucci wrote a new history of the site for the conference volume, and I'll be sure to post it when the pdf is available. For now, perhaps you'd be interested in a previous version? Other accounts can be found here (National Parks Traveler), here (National Fossil Day), and here (Capital Journal, Pierre, SD).

Tweet, J. S. 2014. Smashed rodents, false preprints, and the BBC: the paleontology of Mississippi River and National Recreation Area, Minnesota. Dakoterra 6:107–118.
Posted by Justin Tweet at 10:11 AM No comments:

I have a couple of diagrams that given the basics of the bedrock geology of the central Twin Cities. One covers all of the formations exposed as bedrock within MNRRA, and the other focuses on the St. Paul–Minneapolis bluffs (note that thicknesses and rock types differ elsewhere). They are based on a combination of information in Mossler and Tipping (2000), Mossler (2008, 2013), personal observations, and recommendations from the Minnesota Geological Survey. The patterns and symbols come from the USGS's standards (http://pubs.usgs.gov/tm/2006/11A02/), except for the little fossil cartoons, which came from photos run through a comic filter. They're admittedly schematic (my disconformities are nothing to write home about, and I just used arbitrary widths for susceptibility to erosion, with more resistant rock types sticking out farther), and I'm open to suggestions. I prepared them for MNRRA, so if you want to use them elsewhere, you should credit the park.

Read more »
Posted by Justin Tweet at 9:15 AM No comments:


I'm not quite sure why, but "Fossils in the St. Peter Sandstone" is one of the more popular posts to date. Who am I to argue with the St. Peter Sandstone? Last fall I visited the paleontological collections of the University of Minnesota and took a number of photos. I've received permission to post examples (thank you, Dr. David Fox!), and among them are a few photos of actual St. Peter Sandstone fossils, as primarily collected by Sardeson.

Read more »
Posted by Justin Tweet at 2:14 PM No comments: