Hyolith relationships and paleobiology continue to be active research topics, which isn't bad for animals that had their heyday more than 500 million years ago and are primarily known from diminutive shells. Let's get right down to the issue that has haunted study of Hyolitha, as posed in the title of Smith (2020): "Finding a home for hyoliths". For a couple of years recently, they'd been drifting into the welcoming arms of brachiopods and other lophophores (Moysiuk et al. 2017; Sun et al. 2018), as discussed in previous entries. However, cracks quickly began to emerge. A group of authors has published several papers challenging a close relationship with lophophores, instead emphasizing shell structural similarities with mollusks (Li et al. 2019, 2020) or being a bit more conservative and placing them nearer the base of Lophotrochozoa (lophophores, annelid worms, mollusks, etc.; Liu et al. 2020a).

Liu et al. (2020a) questioned the evidence presented by Moysiuk et al. (2017) and Sun et al. (2018). Liu et al. interpreted the putative pedicles of Sun et al. (2018) as crushing of the tip of the shell, with no evidence for a pedicle or an opening for one in intact hyolith shells. They concurred with Moysiuk et al. (2017) that hyoliths had a tentaculate feeding structure, but they did not regard this as homologous with a true lophophore. Smith (2020), in a commentary on Liu et al (2020a), illustrated two potential options: that hyoliths are closer to the mollusks and annelids, in which case the tentaculate feeding apparatuses of hyoliths and lophophores are not related but shells are an ancestral trait of lophotrochozoans (which also means that the Cambrian record of these groups is more complete than otherwise thought); or that hyoliths are closer to brachiopods, making the shell something that appears multiple times while limiting the tentaculate apparatus to the brachiopod line. (I suppose there could be an option where shells are ancestral *and* the hyolith tentacles are related to the lophophore feeding structure, but this wasn't explored.)

Another area of interest in recent years has been the feeding methods and internal anatomy, bolstered by Cambrian fossils with soft tissue traces. Liu et al. (2020a, 2020b) have documented a tentaculate feeding apparatus in a second hyolith genus, the orthothecid Triplicatella. This hyolith had a more "tuft"-like array of tentacles than the broader "gull-wing" spread of the hyolithid Haplophrentis, and like other orthothecids did not have helens (long curved rods; see Skovsted et al. 2020 for the latest on helens). Liu et al. proposed that Triplicatella was not a filter/suspension feeder, as proposed for Haplophrentis, but was instead a stationary deposit feeder, indicating distinct lifestyles for the orthothecid and hyolithid orders of hyoliths.

We start off with two of the geologically oldest described titanosaurs before jumping back to the Late Cretaceous of Patagonia. If you're keeping track, you may notice that Titanosaurus seemingly should have been included. It's being held over for next month, which will be all Titanosaurus, including various species originally named to Titanosaurus that don't belong there and haven't otherwise been covered.

It's time for the annual review of The Compact Thescelosaurus. As is traditional, there's a new sheet, which this year covers mosasaurs, as you might have guessed from the image. The classification diagram page has been updated as well. (Don't forget, Wednesday the 14th is also National Fossil Day!)

Read more »
Posted by Justin Tweet at 8:08 AM No comments:

While taking a walk

Like any good Minnesotan, I appreciate a quality agate, and although I don't do a great deal of agate hunting, I *have* learned how to spot their characteristic luster. (I've never spotted anything big, but it's a neat trick.) When road work began this summer near where I live, I made it a point to observe the disturbed ground when I would take a walk. The glaciers that brought agates into the Twin Cities didn't linger where I am, but you never know. Until a couple of weeks ago, all I saw were chips, including the remains of one that may have been about the diameter of a dime had it not been shattered into shards by being run over (I didn't know they would splinter like that). This time, though, I noticed a red pebble with a cherty sheen on the path. I could tell it hadn't simply gotten paint on it, so I scooped it up to clean it for a closer look. Although it has microcrystalline quartz and red coloration, and certainly looks like it might be a Lake Superior agate from a few feet away, that's not what it turned out to be. 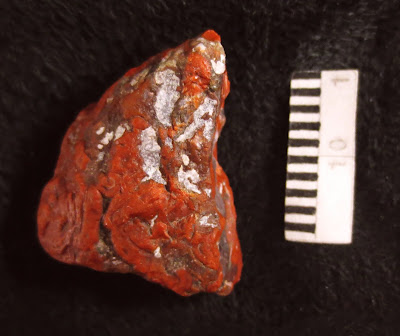 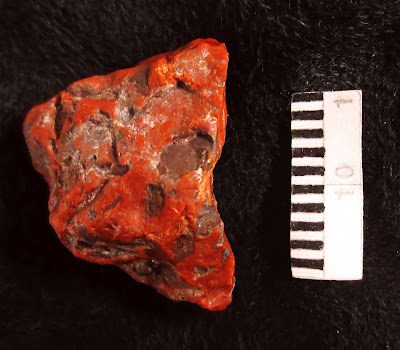 I'm cheating because I haven't yet showed a photo of one of the shorter sides, but this is actually a pebble of Mary Ellen jasper, a stromatolitic jasper that comes from the Biwabik Iron Formation. It's quite a bit older than any of the other fossils that have featured on this blog, coming from a Paleoproterozoic formation about 1.88 billion years old (Jirsa et al. 2008). It gets its name from the Mary Ellen Mine in the Iron Range. How did it get to where I live? Although it could have been a pebble in the subsurface, transported from the Iron Range by glaciers, it may instead have gotten here in gravel being used for the road work. The gravel would have been sourced from a gravel pit, which brings us back to glaciers again because the state's gravel pits are often in glacial deposits. In fact, in some of them you can pick out deposits left by different glaciers moving from different areas. Glaciers that passed through the Superior region brought agates south. Glaciers that passed through the Dakotas scraped up Cretaceous sedimentary rocks. (Cobban and Merewether 1983 commented on a fragment of phragmocone of a Cretaceous ammonite, Prionocyclus novimexicanus, found in glacial drift at the Brickyard.) The glacier that collected this pebble would have gone through the Range before depositing it.