A couple of years ago my graduate supervisor Karen Chin contacted me with a proposition: Christine Bayles Kortsch, an author in Boulder, was planning to create an educational book centered on creating terrariums with living plants and toy dinosaurs, and she was looking for some willing paleo-types to provide technical input. I'd never done anything like that before, and I was interested in learning about the process of publishing a book, so I said yes. Skip ahead to January 2020, and a surprise package has arrived at my door with complimentary copies of "Tiny Dino Worlds". It's my pleasure to write a few words about this book. 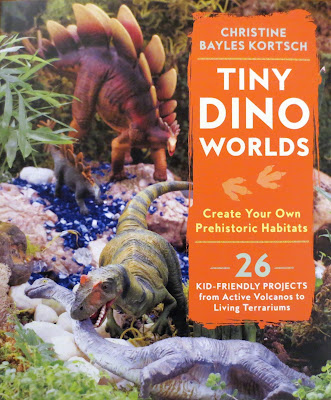 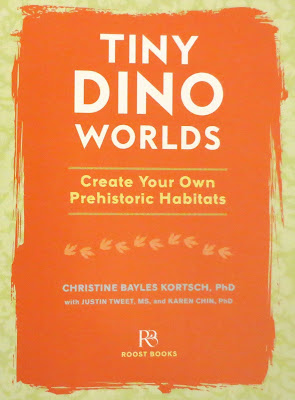 "Tiny Dino Worlds" is structured around ten themed chapters, arranged in geological order starting with Coelophysis in the Late Triassic, going through the Jurassic and Cretaceous, and wrapping up with a miniature dinosaur dig and mini-projects suitable for a dinosaur party. Each chapter touches on a different type of terrarium or diorama, using different plants selected as appropriate analogues for the specific prehistoric setting.


We selected projects throughout the Mesozoic and from a variety of settings, coming up with a mix of old favorites (couldn't do without the Morrison or Triceratops versus Tyrannosaurus, after all), less-familiar settings (dinosaur tracks in the Early Jurassic of North America, or the Lameta Formation, for example), and projects keyed to Karen's and my own expertise (coprolites and "mummy dinosaurs"). For each chapter, Karen and I contributed scientific information: describing what was going on and the various organisms that were around, providing smaller bits of "did you know?"-type information to be placed throughout, and so forth. One piece that was obviously my idea is the "did you know?" blurb for Thescelosaurus. We also managed to kill off the titanosaurs in Chapter 9, which I find entirely fitting these days.


The projects are intended primarily for children 4 to 10 years old, but you certainly don't have to be that age to try them. If you've got some small toy dinosaurs, which is probably not a wild assumption for the readers of this blog, you could certainly try your hand at a Morrison Formation box terrarium, for example. The projects are thoroughly photographed and explained. (For me, whose primary contribution was text, it was wonderful to see how the final physical book turned out. I'd seen pdf proofs, but they didn't substitute for the real thing.)


One of the restrictions we put on ourselves was that we didn't want to force people to have to buy lots of toys of seldom-produced animals to produce the projects, so we tried to focus on dinosaurs that are either commonly represented as small toys, or which can be easily substituted at that scale. For example, Brachylophosaurus can be doubled by other flat-headed hadrosaurs, or titanosaurs by generic sauropods. This restriction did end up weighing against some ideas that didn't make it, such as a woodland/river setting for Amargasaurus and a chapter that would feature Therizinosaurus.

There are plenty of horror stories in the paleo community about consulting on educational projects, but I encountered none of that on this project.* Karen and I actively participated throughout in drafting and refining the scientific information. (In fact, we [okay, I] probably provided too much, but eventually we worked it down to something that wouldn't overwhelm the actual projects.) Karen has worked on educational books before, and was invaluable when there needed to be translation between Christine and myself. Near the end is a Q&A section where Karen and I respond to questions about the field of paleontology.

*Not a horror story, but for the documentary "Secrets of the Mummy Dinosaur", I spent a day being filmed in the CU-Boulder museum collections building doing various things, out of which I think about 10 seconds of me walking and a single line used in voice-over made it to the final product. My travel was reimbursed, so I didn't mind, plus there were much more interesting and important things to include.

If you're looking for some hands-on prehistoric projects to do with your kids, or if you want to try your hand at pterosaurs on the seaside or burying future dinosaur mummies, "Tiny Dino Worlds" will be shipping in early March. You can find more details and order the book at Roost Books and Penguin Random House. 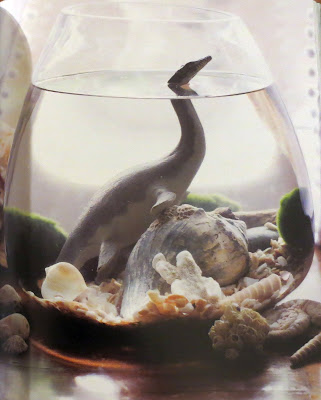 The entrants this week come with both notability and downsides. Normanniasaurus genceyi is one of the few well-established Early Cretaceous titanosaurs, and Notocolossus gonzalezparejasi is one of the largest known titanosaurs. However, both are known from rather limited material to date. Neuquensaurus, on the other hand, has had no shortage of material referred to it, but is a historical mess. So far it has escaped the fate of Argyrosaurus superbus, Laplatasaurus araukanicus, and Titanosaurus indicus, historically significant names that have been re-analyzed and cut down to just a type specimen. There are still questions surrounding Neuquensaurus, but at least there are multiple specimens that can be assigned to it.

Read more »
Posted by Justin Tweet at 9:38 AM No comments:

When I visited Delaware Water Gap National Recreation Area and the surrounding area back in 2017, one of the places I stopped was at a Lower Devonian sponge-coral bioherm. A bioherm is a geological term for a mound-like feature made up of fossils. The useful thing about "bioherm" is that it just refers to the shape, rather than making any conclusions about how that structure came about. (You see, there are reefs, and then there are things that are like reefs but aren't reefs, and there are also just plain old accumulations of skeletal fragments, and there's actually a lot of nuance involved that can tell you things about depositional environment and so forth.)


Anyway, this particular bioherm is one of a group identified as "patch reefs", which is more or less what it sounds like: a relatively small discrete reef. There's a handful of these scattered throughout the area, found in the Shawnee Island Member of the Coeymans Formation. They are described as including a central core up to 160 x 70 m (525 x 230 ft) in area and 15 m (15 ft) thick, surrounded by flank beds of skeletal debris. They are primarily formed of stromatoporoid sponges and favositid tabulate corals, and grew on a marine carbonate shelf (Monteverde 2001; Precht 1988). The rugged modern topography was still in the future; the Acadian Orogeny hadn't even kicked in yet and the previous topography generated by the Taconic Orogeny had been well eroded by the early Devonian.


There hasn't been much occasion to talk about stromatoporoids previously. The first thing to know about stromatoporoids is that despite the confusingly similar name, they have nothing to do with stromatolites. Stromatolites, like Cryptozoon rosemontensis from back in 2014, are layered sedimentary structures left by microbial colonies. Stromatoporoids also show a layered appearance in cross-section, but that's because of layered body tissues: they were sponges (even if this is not immediately apparent), and produced body fossils, not trace fossils. The body, mineralized as calcium carbonate, consists of horizontal laminae supported by vertical pillars. A basic stromatoporoid plan has been adopted several times, including by some modern sponges, but classic Stromatoporoidea had its heyday in the middle Paleozoic as a reef-forming group. I don't think anyone has attempted to identify the Coeymans Formation stromatoporoids to genus or species since White (1882) invoked Stromatopora, but I might have missed that reference.


On the other hand, the common Coeymans patch reef tabulate has been identified to the genus level as Favosites (Weller 1903; Willard et al. 1939; Epstein et al. 1967). Swartz and Swartz (1941) put it in F. helderbergiae, which is appropriate for the time and place, but you wouldn't be able to tell just walking by (unless you carry your own thin-sectioning equipment and microscope with you when you're out for a walk). Favosites, the "honeycomb coral", is rather more impressive than most of the tabulates in the Ordovician of Minnesota, rare Foerstephyllum colonies excepted. The reason for "honeycomb coral" isn't obvious from these photos, but if you did have a loose colony sitting in front of you, you'd be able to see the logic: it's a coral colony that resembles a chunk of honeycomb. Each "cell" of the "honeycomb" is a corallite that held a polyp, much smaller than the polyps of horn corals and other rugose corals but still much larger than the tiny animals of a bryozoan colony.

White, I. C. 1882. The geology of Pike and Monroe Counties. Geological Survey of Pennsylvania, Harrisburg, Pennsylvania. Report of Progress 9(6).

Willard, B., F. M. Swartz, and A. B. Cleaves. 1939. The Devonian of Pennsylvania. Pennsylvania Geological Survey, Harrisburg, Pennsylvania, 4th series. General Geology Report 19.
Posted by Justin Tweet at 9:57 AM No comments: