Although many Minnesotans are aware of the great Midcontinent Rift that runs across the state, it's less generally well-known that evidence of some of the largest known volcanic eruptions in the history of the planet can be found in the Twin Cities. In fact, you can easily put your hand on a layer of former volcanic ash by taking a short walk at our old friend Shadow Falls Park, at the end of Summit Avenue.

Read more »
Posted by Justin Tweet at 9:31 AM No comments:

Nothing particularly earth-shattering today. I would just like to direct you to the right-hand sidebar, where I've added a section to make it easier to get to The Compact Thescelosaurus, as well as a page that collects a few dozen sources for downloadable or viewable publications. As long as we're on the latter subject, I'll throw out a plug to Barnum Brown's description of the integument of the AMNH's panel-mounted Corythosaurus, and Henry Fairfield Osborn's description of the same for the "trachodon mummy" (note: 74 mb, but you also get an article on the skulls of Allosaurus and Tyrannosaurus). It also gives me an excuse to use this charmingly old-school restoration of various non-contemporaneous duckbills hanging out, found in Brown's publication. 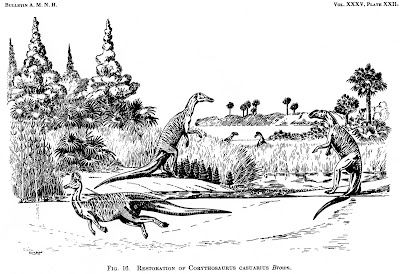 Email ThisBlogThis!Share to TwitterShare to FacebookShare to Pinterest
Labels: diversion

One of the notable quirks of nodosaurids is a predilection for washing out to sea. Nodosaurus textilis and Stegopelta landerensis are a couple of featured examples. We turn now to another species from the Western Interior Seaway: Hierosaurus sternbergii.

Read more »
Posted by Justin Tweet at 5:45 PM No comments:

Email ThisBlogThis!Share to TwitterShare to FacebookShare to Pinterest
Labels: ankylosaurs, Cretaceous, dinosaurs, way too much

A few weeks ago, a friend brought in an odd object to the Science Museum, which he had collected from an excavation in the vicinity. The object is a carbonate rock featuring concentric ridges that seem to be radial around a central depression. On the off-chance that it was some kind of exotic trace or trace-like pseudofossil, and that it had been illustrated, I went across the hall, pulled the volume of the Treatise on Invertebrate Paleontology that covers traces, and was pleasantly rewarded in the pseudofossil section with an illustration of something called Dystactophycus. The illustrated specimen was even from the Cincinnatian, which is practically as good as the Platteville/Decorah, being just a couple of million years younger. Of course, when something comes this quickly I'm honor-bound to be suspicious, but in this case the actual existence of something like Dystactophycus is more interesting than the question of whether or not I was right. (I do get back to the question of identity in the last paragraph.)

Dystactophycus, as currently understood, is one of those things that makes perfect sense once you've heard of it, but otherwise would probably never occur to you. It is composed of concentric markings on a conical structure. The initial describers (Miller and Dyer 1878) interpreted it as a seaweed, because the year was 1878 and the campaign to wrap peoples' minds around invertebrate trace fossils was far from being over. In short order, it was dismissed as an impression of a concentrically ringed bryozoan (Monticulipora by way of Lichenalia concentrica, both then considered corals) (James 1885, 1895–1896). More recently, Dystactophycus has been attributed to crinoids (Osgood 1970; Meyer and Davis 2009). As Osgood described it, the earlier researchers had the thing upside down: instead of an upward-pointing cone, the center was a low depression. The stem was partially buried by mud and the rest of it was spun around by swirling currents, causing its arms to sweep out an area that became the depression and quite naturally leave concentric markings. At some point, the crinoid detached, and the depression filled in the absence of the sweeping action. Although kind of like a trace fossil, these markings are not trace fossils because they are not evidence of biological activity. Think of them more like an Ordovician equivalent to marks left by a log on a river bottom (tool marks, in the parlance). (If you'd like to see a true crinoid trace, check this out!)


So, do I think that the specimen in hand is an example of Dystactophycus? Although it is superficially similar to the description, there are a couple of characteristics that lead me to say "no". The major issue is that the specimen is not a simple cone shape. Instead, after rising from the center, it slopes again (so kind of a doughnut shape), and the concentric lines are not confined to the cone but continue on the back side. In addition, the markings are not so much grooves and ridges but concentric terraces. My guess instead is some sort of abiotic sedimentary deformation. 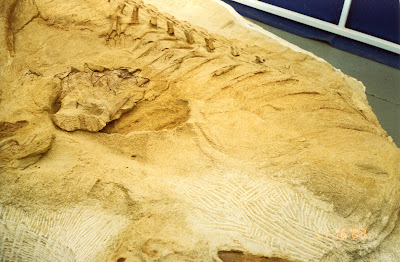 So, one of the things you're supposed to do if you have a blog is to talk about your research when a paper you authored comes out. Okay, give me a minute. I mentioned back in the gut contents post that I did my thesis on what was found in the inside of a brachylophosaur. The first part, on the gut contents themselves, was published back in 2008 (Tweet et al. 2008). Finally, after about a decade of gnawing on the manuscript, comes the other part (Tweet et al. 2016).

Read more »
Posted by Justin Tweet at 3:41 PM No comments: