I've just returned from the 2016 Geological Society of America annual meeting at Denver, wherein I gave a presentation on our recently updated inventory of paleontological resources in the Mojave Desert Inventory and Monitoring Network. Trying to stuff Death Valley National Park, Great Basin National Park, Lake Mead National Recreation Area, Tule Springs Fossil Beds National Monument, and friends into a sub-15-minute box is an interesting experience. I could have done a semester-long class and still missed some things.


One of the topics I included was type specimens from the various National Park Service units, which was also on my mind because our summary will be in the upcoming New Mexico Museum of Natural History and Science Bulletin (#74, Fossil Record 5) (Tweet et al. 2016; feel free to ask me for a copy!). For reference, biological taxa (species, subspecies, etc.) are supposed to have at least one specimen which bears the name of that taxon. Ideally, this specimen is complete enough and well-preserved enough to permit useful comparisons with other specimens and taxa, although as we have seen this is not always the case, and leads to all kinds of delightful technical complications. The more common kinds of type specimens include:
There are also several other "-type" terms, but they either are not name-bearing or are rarely used, so we'll skip them.

We started work in earnest on type specimens and fossil species named from NPS areas back in 2012, as one component of a "synthesis" project to summarize our accumulated information. Obviously, an important point of interest for types is "hometown pride", being able to say that "this came from here". It's a nice educational tidbit for park staff to be able to say that such-and-such a fossil species was described from material found here. In terms of resource management, types are invaluable proxies for other paleontological resources. I've found that types leave certain footprints in the scientific literature that are easier to find than many other reports of fossils, and once you've tracked down a type, you've usually opened up additional records. Now you've got a researcher's name, a dig or expedition, a locality that may need management, maybe a paper trail of notes and other publications, hopefully a repository somewhere (this gets dicey the farther you go back into the 19th century), and a species name. Most of this information can be plugged into various searches, leading you to other pieces of information you hadn't known about before. Whoever found that specimen probably found other fossils; were they ever published, and where are they?

These are all good things to know, but first you have to find the types. I've come across relevant types and taxa by slogs (going page-by-page through giant monographs on Alaskan fossils or museum catalogs), by skims (simply entering "holotype" and the name of a park in a search engine), by obvious methods (trolling Wikipedia's "Paleontology in 20XX" articles), and by not-so-obvious methods (taking the name of a locality, adding "-ensis", and going through online collections databases). After four years of compiling and checking, what have we got to show?


The numbers quoted in the publication are actually a little off now, thanks to the addition of Katahdin Woods and Waters National Monument and a recent spate of descriptions, tacking on a few new names to Death Valley National Park, Fossil Butte National Monument, and Great Basin National Park. Fossil species have been named from 69 NPS areas, along with one affiliated area (Chimney Rock National Historic Site). In addition, fossil types are historically associated with two NPS trails (Lewis & Clark National Historic Trail and Santa Fe National Historic Trail) and one historic site (the original type of Megadactylus polyzelus from next door to Springfield Armory National Historic Site), and disbanded Fossil Cycad National Monument was the source of some paleobotanical types. Omitting the special cases just cited and several examples of taxa with cotypes from two parks (welcome to the free-wheeling world of 19th century paleontology), our tallies are 2,228 "confirmed" taxa and 2,563 "potential" taxa. "Confirmed" taxa are those where I can pinpoint the locality of the type(s) to within a park, and "potential" are those where I can't be sure one way or another, either because the locality information is too vague ("White River Badlands", "Petersburg", "Minneapolis", "John Day Beds", "Florissant", step up to claim your prizes) or the locality plots right along a boundary. The champion by an astronomical unit is Florissant Fossil Beds National Monument, which accounts for a little more than a third of the taxa. Several other big names rank highly as well, such as Badlands National Park, Grand Canyon National Park, John Day Fossil Beds National Monument, Petrified Forest National Park, and Yellowstone National Park. Then there are some you might not think of in this context, such as Colonial National Historical Park, Guadalupe Mountains National Park, our old friend Mississippi National River and Recreation Area, Vicksburg National Military Park, and Yukon - Charley Rivers National Preserve. Petersburg National Battlefield is currently ranked in the top 10 for total, although this is mostly a consequence of abysmal locality information, an unusually spread-out and discontinuous park, and the fact I haven't been able to give the Petersburg taxa a second pass.


The different groups of organisms represented run the gamut in time and taxonomic diversity, from Mesoproterozoic stromatolites of Glacier National Park to a rabbitbrush found in a Holocene packrat midden at Chaco Culture National Historical Park. Invertebrates are most abundant, representing about two-thirds of the total, thanks to the arthropod titan that is Florissant and some ambitious paleontologists working primarily on mollusks during the middle 19th to early 20th centuries. Of course, there is a certain amount of taxonomic inflation which I assume permeates the whole thing. We've got something of a handle on the vertebrates, but at this point we have not removed synonyms, dubious names, etc., because of the subjectivity and because it would be biased against groups that people actually work on, as opposed to 19th century Ordovician snails from the Twin Cities that nobody has restudied.

The database is also useful for looking at the human history of paleontology in NPS areas. In terms of naming activities over time, there is a pretty obvious spike in the 1890s, which is thanks in large part to Florissant. Behold the graph below, which I created just this afternoon: 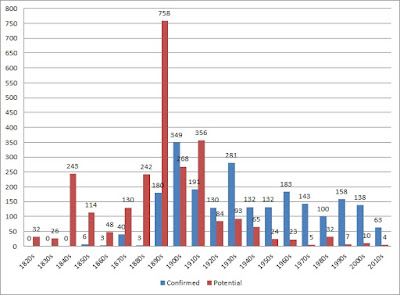 We can also see about when paleontologists started giving useful locality information for their species, which begins about the 1890s as well. Aside from a little spike in the 1910s, which again is due to Florissant, the red bars representing the taxa with insufficient locality information decline pretty hard, so that by the middle part of the 20th century the red taxa are mostly based on specimens collected in the "good old days", not new discoveries. (The thing about Florissant is that "Florissant" the place is not the same as "Florissant Fossil Beds National Monument", which includes some but not all of the relevant fossil localities. I'm reasonably certain that if we could go back in time to watch collection, most of what I have flagged would turn out to have come from what is now the monument, but I'm not gonna pretend that I know for sure. The same general situation holds for Badlands National Park, John Day Fossil Beds National Monument, and a few others.)

We can also have a look at the history of research. For example, here is a table of the most prolific paleontologists, when they were active, and what parks they are primarily associated with:

Most of these paleontologists were active sometime between 1860 and 1940, which is unsurprising given the general currents of taxonomy, and the majority were invertebrate specialists. There are three paleobotanists (Knowlton, Lesquereux, and Manchester), and Edward Drinker Cope represents the vertebrate side of things. NPS fossils are one area where he beats Marsh handily (his great rival only tallied 50).

Of course, our database changes constantly, as new taxa are named, new parks are added, and overlooked information uncovered. Who knows what it will look like this time next year!

A couple of other notes:
I am temporarily bereft of my sidebar blog links and site links, thanks to a Google update of some kind. Hopefully, they are returned to me without my having to reconstruct them. If they're not back by the end of the week, I'll add them myself.

Finally, if you'd like to visit Equatorial Minnesota in person, I'll be at Coldwater Spring for the Second Saturday fossil event this Saturday, October 8. Come on over if you have the time! I can guarantee you'll see brachiopods, but the rest is up to the Platteville, which usually gives us a surprise. Coldwater Spring is NPS property, so this is strictly catch-and-release, of course.