Some thoughts on St. Anthony Falls

If you're familiar with the history of Minneapolis, you probably know that beneath what we now call St. Anthony Falls are the remains of the natural St. Anthony Falls. The real falls went kaput quite a while ago; October 5, 1869, to be precise. The creation of the Hennepin Island tunnel is usually named as the culprit, but after seeing this photo I am beginning to suspect suicide. For various reasons, the presence of a waterfall or a reasonable facsimile thereof was required, so with the aid of the Army Corps of Engineers, the body was embalmed in wood and cement, and propped up in its accustomed place.


The "accustomed place", though, was just where it happened to be when the bold industrialists of the middle 19th century came upon it. St. Anthony Falls, like all waterfalls, was a temporary and moving feature. In one of those odd circumstances of history, if the falls had failed even just a few years later, there wouldn't have been much left to shore up. Unfortunately for lovers of scenic waterfalls, St. Anthony Falls not only was in the heart of a growing industrial area, but it was also naturally nearing its end stage. The basic geology of the falls is a hard Platteville Formation cap over much less resistant Glenwood Formation and St. Peter Sandstone, and that Platteville cap only extends about as far upriver as a little past the south end of Nicollet Island. Consider the geologic map below. It is clipped from Mossler (2013), zoomed in on part of Minneapolis. The black line going from the lower left to the upper right traces the hinge of a monocline (a step-like fold), with the arrow pointing downstairs. Coincidentally enough, the arrow begins on Nicollet Island and its point ends at the straight line of St. Anthony Falls, which should orient you. The medium gray lines are the roads, and the violet lines and violet numbers refer to the elevation of the bedrock surface. The circles are the locations of wells with logs that were used to create the map. The various areas of color correspond to whichever bedrock formation is nearest the surface in a given area (the vast overwhelming majority of the bedrock is buried by cover; dark gray blobs show where rock is exposed or within a short distance of the surface). The truer blue in the upper left is the Prairie du Chien Group. It is overlain by the St. Peter Sandstone, here colored light pinkish. In turn, the St. Peter is overlain by the Glenwood/Platteville, the light blue that dominates the map. Minneapolis is mostly over an area of the Platteville, with the pink of the St. Peter showing where the gorge of the river has cut through below the falls. There are also a couple of blobs of medium blue above the Platteville for outliers of Decorah Shale, on the right side of the map. For our immediate purposes, the most important thing to notice is that the Platteville cap runs out between the Hennepin Avenue Bridge and Third Avenue Bridge. In other words, St. Anthony Falls was not long for this earth with or without the antics of the 1860s. (Which is not to excuse the perpetrators.) 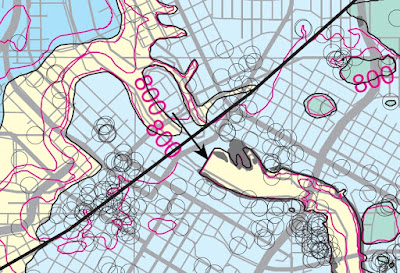 There is also a second, less-noted factor that was working against the falls: the multiple parts of the Platteville itself. Recall that the full Platteville in the Twin Cities is equipped with four members of varying characteristics, making it nearly 30 ft/9 m thick. Although the Platteville is not a thick formation, when all four members are present it behaves as several units; most significantly, the natural joints do not line up. Compare it to building a wall with bricks: staggered bricks make better walls than stacked. A rather important fact noted by Sardeson (1908) is that the upper part of the Platteville Formation cap was no longer present north of the falls by the mid-1800s, due to scouring action from the rapids upstream from the falls. Thus, only the Pecatonica and Mifflin members were still there (the Hidden Falls Member can be ignored as useless for the purposes of holding up a waterfall), and the Pecatonica is only a foot or two thick while the Mifflin is laced with neat flat vertical joints. With the Platteville at half strength, erosion was already accelerated.

The recession of the waterfall, though, also presented an opportunity to do a little useful math. Newton Horace Winchell, who we've met a couple of times already, is the first to have made the connection: given the rate of recession and the distance to the initiation of the falls, you could figure out how old the falls were, and also estimate how long it had been since the most recent ice age. What Winchell realized was that the Mississippi gorge was a post-glacial feature. Every time the glaciers rolled through, they buried the previous drainage, and when they retreated, rivers formed new channels (which takes more work) or re-excavated old channels (which is easier work if you can get it). In our case, what we call Glacial River Warren (basically the Minnesota River supercharged with the might of Lake Agassiz) was doing its thing in the area of Dayton's Bluff when it encountered one of the buried channels. Glacial River Warren being what it was, in practically no time it had scoured out the loose debris dropped off by the glaciers, which caused a significant difference in elevation between the new upstream channel and revitalized downstream channel. With the lucky presence of the durable Platteville cap and the more forgiving St. Peter Sandstone beneath, you're all set up to make a waterfall. Winchell didn't have quite all of this information (he was working with the falls from Fort Snelling, not knowing the entire subsurface story), but he had enough of it to make some useful calculations, including historical records going back to Father Hennepin in 1680, giving him about 200 years of data to figure out the rate. He first presented on this work in 1877, followed by revisions in 1878 and 1888. He arrived at approximately 8,000 years for the age of the falls.


(One question that I find interesting, at least: with the repetition of glacial cycles, could there have been Pleistocene "St. Anthony Fall"s, and perhaps Pleistocene bluffs and sandstone caves? Too darn much cover!)


Not to be outdone, our old friend Frederick Sardeson made his own series of revisions a few decades later (1908, 1916, 1932). Sardeson's major contributions to the discussion are his recognition of the erosion of the upper Platteville, as mentioned above, and his observations about the history of the river system on the St. Paul–Fort Snelling stretch, including his recognition that the falls did not start at Fort Snelling, but farther downstream. With this addition, Winchell's 8,000 years are nearly doubled (Sardeson accepting that the 8,000 year figure was essentially correct for the Fort Snelling–Minneapolis stretch). With the advent of radiometric dating, we have one serendipitous check on their figures: the Hidden Falls giant beaver. The geography of the site is such that the falls would have had to have passed through the area before the beaver could be crushed. As discussed in that post, Erickson (1967) gave a radiocarbon age of 10,320 ± 250 radiocarbon years before present (12,685 to 11,310 calendar years before present). Given that Hidden Falls is a short distance upstream of Fort Snelling, 8,000 years is too short, but certainly not a bad first approximation.