Pop quiz! (don't worry, it's not for credit)


Here we have an assortment of fossils, tastefully arranged in a holiday-appropriate setting. They're all the typical local Ordovician stuff, but many Paleozoic shallow marine formations will have a lot of the same general things. What are they, and how can you tell?

Why don't we do this in a systematic way? First, let's number the bins: 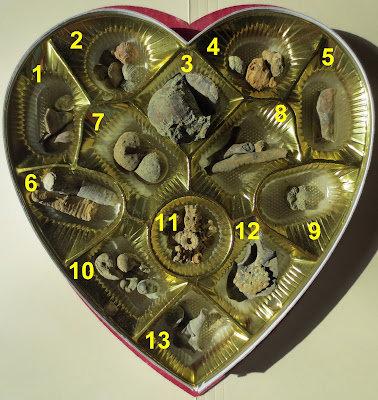 And then take them a couple at a time (especially because it's kind of hard to distinguish them all in the group pictures). I'll give some hints if you can't tell, and then at the end all will be revealed:


1. These are conical fossils with some fine lines or wrinkles on the outer surface running from point to wide end, and a set of closely packed radiating internal structures visible on the base.

2. These fossils include a few that are vaguely nut-like, and some that are much flatter, including one (upper left) with a seashell-like appearance. They have pronounced ribbing, and the nut-like examples seem kind of squashed, because on one side the middle part seems pushed down and on the other it seems popped up. I could draw lines on each shell that would make mirror images, but the sides are not symmetric to each other.


3. These are large thin D-shaped or semicircular shells with find radial lines instead of the prominent ribbing of Bin 2 fossils. They are found as single shells instead of two shells together, and have bilateral symmetry.

4. These look like snail shells, coiling both horizontally and vertically, making pyramidal shapes.


5. This is a cylindrical fossil, broken at both ends. Neither end shows any internal structures. The outer surfaces have fine hatching, like many tiny sets of fingernail scratches.

6. These three fossils are also broken at at least one end. They are gently to strongly tapering, and are divided into a number of thin segments.


7. These fossils are domed to slightly peaked, or perhaps "gumdrops" to "chocolate kisses". Their surfaces are covered by pinprick-like holes, and if you turn the larger fossils over, you'll see concentric lines centered on a small fragment.

8. These fossils are cylindrical and straight or branched. Like Bin 7, they have pinprick-like holes.


9. This is a specimen with several types of fossils, but we're focusing on the masses that look like wasp nests or petrified soap bubbles. The vaguely polygonal individual openings are about a millimeter across, so much smaller than those in Bin 1 but much larger than those in bins 7, 8, and 12, and have very thin walls.

10. These are bulbous objects, curled up in a flat plane as if swallowing themselves via a flared opening.


11. These fossils are gear-like ornamented rings, or stacks of several rings, with open centers.

12. These fossils include one large fragment with numerous pinprick-like marks on a curved surface a bit like a petrified flag, and a smaller fragment with millimeter-scale holes (open all the way through), distributed in a fairly regular array, surrounded by those pinprick pores. Both fossils are quite thin.


13. There are three specimens in this bin, and they share triangular segmented objects with a central lobe.

Answers:
1. Horn corals/solitary rugose corals, depending on how technical you want to get. (Presumably they're your basic Lambeophyllum/Strepelasma horn corals.) The two smaller examples are sitting on their broken calyces. For whatever reason, these four are all broken obliquely across their calyces, a bit like someone breaking off part of the top of an ice cream cone. The radiating structures are septa. In the wild, if you only see part of a horn coral, or if the fossil is an internal mold, it may look something like an acorn. Of course, many horn corals are substantially larger than these. Look for the lines running from tip to calyx and for the radiating sunburst in the calyx to distinguish them from fossils that may have a similar shape. They also may have "belting". (Incidentally, if you see circular or oval sunbursts in building stone, these are cuts parallel to or somewhat oblique across horn coral calyces.)

2. Small brachiopods: If you've found nut-like shells with ribbing like these, start with brachiopods.

4. Gastropods: If you've got a shell that looks like a snail, it probably *is* a snail. There are some exceptions, but you'll be right more often than not.

5. Burrow cast (Rauffella): Burrows can take on any number of forms, but simple cylindrical fossils with no obvious tapering or segmentation are often invertebrate burrows. They can be confused with partial root traces, but you are unlikely to find root traces in marine rocks or associated with marine fossils. (More troublesome are poor-quality natural molds and casts of cylindrical body fossils, like some nautiloids, or the mythical Cylindrocoelia, which could include cylindrical nautiloid internal structures.)

6. Orthoconic (straight-shelled) nautiloids: If you've got a tapering smooth-sided cylindrical fossil with segments defined by straight lines, think "nautiloid". You may or may not see the siphuncle, which may show up as a kind of "belly button" on a cross-section.

7. Hemispheric bryozoans (Praspora, probably, but there are other hemispheric bryozoans): Bryozoans can take on a number of forms, which can sometimes be mistaken for burrows, bones, or twigs. What you want to see to know if it's a bryozoan are those tiny pores.

8. Ramose bryozoans: These are the "twiggy" bryozoans.

9. Encrusting tabulate coral colony (Lichenaria): A decent rule of thumb for distinguishing bryozoans, tabulate corals, and colonial rugosa is the size of the opening for the animal. If the openings are pinpricks, it's a bryozoan. If they're a millimeter or so, it's a tabulate. If they're closer to centimeter scale, it's a colonial rugose coral (think Petoskey stones, which are colonial rugosa). (Rugose corals should also have the prominent sunburst of septa, but sometimes you get unlucky, or a non-conformist tabulate.)

10. Bellerophont gastropods (or bellerophont monoplacophorans? Either way, bellerophonts): Bellerophonts are not uncommon in the Paleozoic, and can be a bit confusing because they're similar to but not exactly like traditional snails, while also looking a bit like miniature coiled nautiloids. Look for the shells that are coiled only in one plane so that they appear to be consuming themselves, often with a flared aperture like a brass instrument.

11. Echinoderm columnals (crinoids in this case): The fossil "sprockets", "rings", "gears", "Cheerios" or "Lifesavers" are usually distinctive enough to pick out; we're used to identifying them as crinoid columnals here, but in other places there are other stalked echinoderms with basically the same kind of stems, notably blastoids. Chunks of stalks can be more problematic. If you're not familiar with crinoids or vertebrae, you might confuse a partial stalk for a backbone of a small animal. Note that while some vertebrae have a central pore, they do not look like rings, and are not ornamented all the way around like a gear. If a stalk is completely engulfed in an encrusting bryozoan, you might not be able to tell it from a ramose bryozoan unless you can see the traces of the sprocket edges, which will make the whole thing look kind of lumpy at regular intervals. Small partial straight nautiloids (or nautiloid siphuncles) versus short strings of unornamented crinoid parts can also be a problem.

12. Bifoliate bryozoans: Here we have another common type of bryozoan. Again, the pores are the key.

13. Trilobite pygidia (tail segments): Pygidia are common trilobite fossils, and are usually distinctive. Look for the roughly triangular pieces with the central lobe and segments. It is possible for small brachiopods and pygidia to be confused, especially if you only see the central lobe and one of the side lobes, but usually a close look will show the difference. (This problem usually arises when you're just starting out, are not too familiar with brachiopods or trilobites, and would really like to find a trilobite.)
Posted by Justin Tweet at 12:13 PM