The Prairie du Chien Group is great for stromatolites, but not much for other fossils except for localized occurrences of molds and casts of mollusks; see for example the second photo here or the second photo here. You do get lucky occasionally, though. I did not collect the following block myself, nor was it found in situ, but I would be very, very surprised if it did not originate in the Prairie du Chien Group. The most notable aspect about it is this spiral feature: 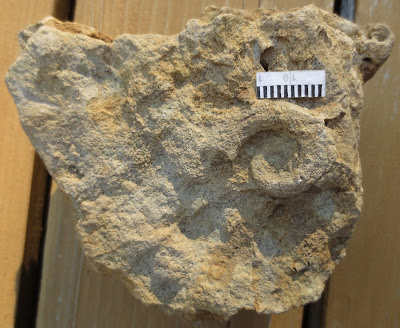 What is it? A few thoughts:

If you had to pick a second group to find in the Prairie du Chien after stromatolites, it would be snails, and the Prairie du Chien snails do include some large forms that are flat-coiled or coiled in a low spiral, such as Helicotoma and Rhachopea. They're even of comparable size to this.

Some trace fossils spiral, but we can see that the width of the spiral passage increases as it goes out, and animals do not generally increase in girth like that over a short distance unless they handle matter like the Incredible Hulk, so that's not what we have.

Finally, although we usually think of early Paleozoic nautiloids as straight-shelled, there were a few coiled forms, including one known from the Prairie du Chien: Eurystomites. We can see that this spiral seems to separate from the inner coil near the end, and conveniently enough, Eurystomites also gets lax at the end of its coil. However, there's no clear indication of chambers.

What do I think? Without being able to see the entire fossil, you could make an argument that this is an internal cast (steinkern) or external cast of a snail (in which the outer whorl shows separation either because we're looking at the inside or because the plane of exposure isn't low enough to show that the whorl is actually just flaring), or a poor-quality external cast of a Eurystomites or similar nautiloid (can't be internal, because there's no evidence of chambers).

Operating on the principle that where you find one body fossil in the Prairie du Chien, you might find more, I examined the rest of the block, which turned out to have several more easily interpreted molds of much smaller and more obvious snails: