Sometimes you look at a slab, and you notice one special thing about it. "That's a nice Isotelus hypostome." "Neat strophs." "Look at that Phycodes!" In this case, it's "Gee, that's a lot of bryozoans!" 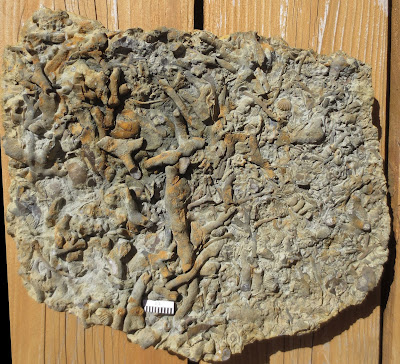 To be sure, there are also some interesting small brachiopods, as well as a few crinoid rings and a tiny patch of Lichenaria, but gee, that's a lot of bryozoans.

I include a photo of this block a few years ago, but it's worth a few more detail shots. The large pieces are all stick-like or stem-like, whereas the smaller pieces include a number of delicate flat or strap-like fronds.

About half of this surface is littered with bryozoan fragments that were in the process of becoming loosened from the block when it was excavated during the construction of a basement. Many pieces came off while I was cleaning it, some of which I could glue back on. (Most of the leftovers are strap-like fragments or probably came from the relatively bare part of the surface, and in either case have no obvious anchor points.) Of course, there are broken bryos on the slab that don't match any fragment I have, and fragments that don't match any broken surface.

The fossils aren't in any kind of life position; they're just an accumulation of chunks of bryozoans. Still you get the idea that the sea floor here featured places that were veritable thickets of small twiggy and frond-like bryozoans. To all you time travelers: probably not recommended for bare feet.