What I Did While I Was Out

I made no post last week because I was traveling for work. Generally, I don't have the time to work on a post while traveling, and this was no exception. In order to get the most bang for our buck on work travel, we try to schedule as many projects as possible, and this trip was no exception. I had four separate projects scheduled over eleven days.

I headed west from St. Paul on Wednesday, May 29, and stayed overnight in Murdo, South Dakota on the way to my first stop, the Mammoth Site of Hot Springs. I was going there not as a tourist, but to examine and copy field notes made by the late Larry Agenbroad concerning the mammoths of Channel Islands National Park, in preparation for an upoming project. I did take a few more touristy photos, though.

From there, I drove to Casper, Wyoming, for the 11th Conference on Fossil Resources, held at Casper College. I gave a talk on the paleontology of St. Croix National Scenic Riverway on Saturday, May 31. Casper College is known in paleontological circles for the Tate Geological Museum. There just happened to be another mammoth there: 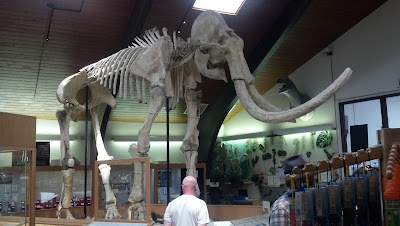 On Sunday, June 1, I left Casper and drove to Hulett, Wyoming, in advance of working at nearby Devils Tower National Monument for several days. At some point this summer I'll probably get around to a post on the bedrock geology of this monument. The Tower dominates a landscape of weathered sedimentary rock dating to the Permo-Triassic (the Spearfish Formation is hard to place) and Jurassic. The red beds of the Spearfish Formation are well-exposed in the southern and eastern parts of the monument. They are followed by the white and red beds of the Gypsum Spring Formation (poorly exposed) and four divisions of the Sundance Formation. In ascending order, these are the Stockade Beaver Shale, Hulett Sandstone, Lak, and Redwater Shale members. Most of these units are recessive, with the exception of the Hulett Sandstone Member, which forms prominent yellowish sandstone bluffs. These bluffs make it a little easier to observe the position of the Stockade Beaver Shale Member than it would otherwise be: it forms light grayish to yellowish-brownish slopes of weathered material beneath the bluffs.


On Thursday, June 6, I left Hulett and drove to Dickinson, North Dakota, so I could attend a meeting the next day on a planned project at Theodore Roosevelt National Park. Theodore Roosevelt National Park's badlands belong to the Paleocene-aged Fort Union Group, the same geologic unit that also is the source of the Science Museum of Minnesota's Wannagan Creek fossils.


After the meeting, I had some time to myself in Dickinson, so I also stopped at the Badlands Dinosaur Museum.


Finally, I drove home from Dickinson on Saturday, June 8. Look for the conclusion to the titanosaur osteoderm series next week!
Posted by Justin Tweet at 9:54 AM