The same day I got out to Shadow Falls Park, I also stopped at Coldwater Spring and Fort Snelling State Park. These locations are geologically restricted to the Platteville down to the St. Peter, and the exposures are much more in the bluff mode of expression.


What impressed me at these sites were the numerous rockfalls. It seemed like a lot, but I don't have the numbers to judge. It would actually be a simple project: somebody could periodically go along the paved path and document new falls by photos and GPS. The rub is that it's also a long-term project; you wouldn't get useful information from a couple of years.


The outcrops of the Hidden Falls and Magnolia members just north of Coldwater have been taking a beating lately, although I'll grant that it's not as impressive when they only fall a few feet. There's both day-to-day attrition and larger collapses. 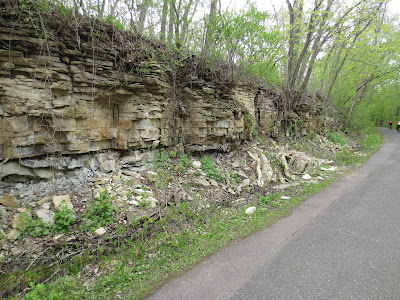 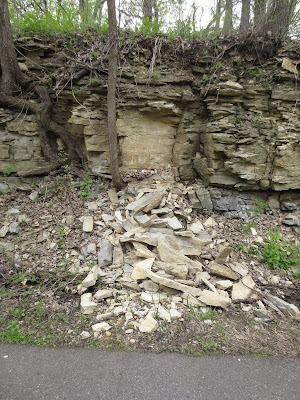 If you should happen to go below the paved path, down toward the river (say if you're going into the dog park), you can also see evidence of older disruption, where large blocks of Platteville have been displaced.

Given the geology, fossils weren't terribly diverse or well-preserved. There were the usual brachiopod beds exposed on some of the fallen blocks: 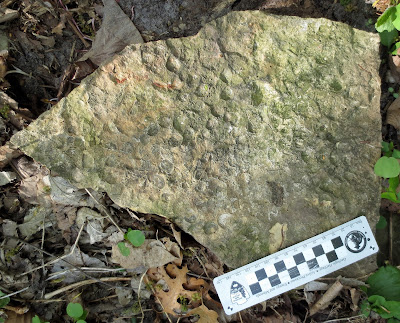 There were also these things. 99.999% says they're a couple of weathered burrows, although the coincidental weathering on the longer of the two made me think of segmented stems when I first saw them, which would be rather odd for the Platteville. Further study of the photo showed that the "segmented" feature was longer than I thought, and that the apparent segmentation was limited to the two lines. 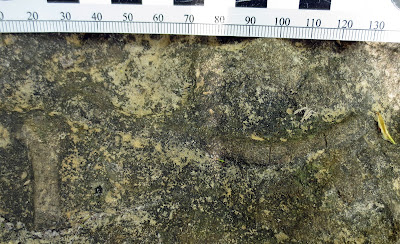